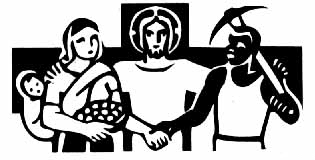 Casa Alma is one of over 200 Catholic Worker communities around the world and one of four in Virginia. The Catholic Worker was launched as a radical social justice newspaper in 1933 in New York City by Dorothy Day, Peter Maurin, and their volunteer colleagues as part of an effort to live the charity and justice of the Gospels.

The Catholic Worker movement is a network of autonomous communities which value the inherent dignity of every person.  Catholic Workers practice peace and nonviolence, justice and reconciliation, care for creation, simple living, and service to and solidarity with those who are poor.

At Casa Alma, we seek to express the principles and values of the Catholic Worker movement by:

“What else do we all want, each one of us, except to love and be loved, in our families, in our work and in all our relationships? God is love. Even the most ardent revolutionist, seeking to change the world, to overturn the tables of the money changers, is trying to make a world where it is easier for people to love, to stand in that relationship with each other of love.” -Dorothy Day, “On Pilgrimage” April 1948